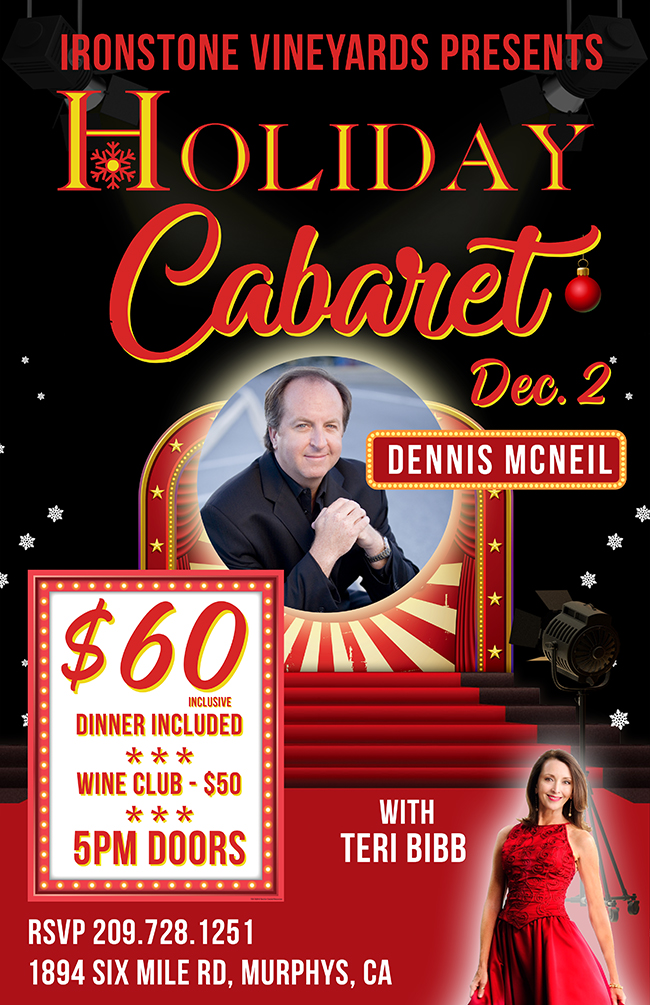 Kick off the holiday season with a little bit of Broadway in Murphys! Join us as our Music Room transforms into a dinner theatre, featuring award-winning performers Dennis McNeil and Teri Bibb.

Award-winning tenor, Dennis McNeil was 1993 National Winner of the Metropolitan Opera National Council Auditions. As a leading tenor at the New York City Opera, he was awarded the Richard F. Gold Career Award for his portrayal as ‘Mark’ in their New York Stage Premiere of Michael Tippet’s A Midsummer Marriage. He also holds first place awards from the Southern California Opera Guild and the Victor Fuchs Memorial Competition and was a recipient of the Emily Baratelli Memorial Award from the New York Opera Index. He is a Sullivan Grant Recipient as well as a recipient of a Rex Foundation Grant from the Grateful Dead.

Teri Bibb played the role of Christine Daaé in The Phantom of the Opera more than 1,000 times on Broadway and with the national tour, singing a command performance at the White House and earning a Helen Hayes Award nomination and a Carbonell Award along the way. She was also seen on Broadway as Amalia in the revival of She Loves Me, where she was the standby for the role. Other notable credits include playing the title role in Fanny opposite the late José Ferrer at the Paper Mill Playhouse, and starring in the world premieres of two new musicals: Songs From the Tall Grass at the Ford’s Theatre in Washington, D.C. and Children of the Night with the Katselas Theatre Company in Beverly Hills, for which she received an Ovation Award nomination.