There will be something entertaining for each and every member of the family when the 69th edition of Murphys Homecoming is held Saturday, July 15 from 8 a.m. to 9 p.m. in the cool environs of the Community Park.

The day will kick off at 8 a.m. with a run/walk organized by Brian Klassen, who has staged many successful runs. Named the Firecracker Five, it will be five miles in length and is patterned after a foot race that was held in the area in the 70’s and 80’s.  Participants will gather at the park and traverse a course that goes down Six Mile Road, past Ironstone Vineyards, returning to the park.  Prizes will be awarded in a variety of categories. Admission “cost” is a non-perishable food item that will be donated to the Murphys Pantry.  Those wishing to register should call Klassen at 607-5073.

Starting at 11 a.m., and extending into the afternoon, there will be a wide variety of things to do for young people including crafts, fishing games, face painting, and a water slide.

From 11:30 to 1 p.m. rousing music provided by Mic Harper and the Calaveras Community Band will fill the air.  Tracing its heritage to the gold rush days, the band plays a wide range of music from Sousa marches to popular show tunes.  Its repertoire contains pieces for everyone’s musical taste.

Throughout the morning, and well into the afternoon, Helen’s Hut will be the place to go to purchase barbecued hamburgers and hot dogs, ice cream, and a wide variety of beverages including beer and wine.

A long-standing Homecoming tradition, the Old Timers Luncheon, sponsored by the Native Daughters of the Golden West, will be provided for any Murphys resident who has lived in the area for at least ten years and has reached the age of 70.  Reservations are necessary and may be made by calling Mary Piumarta at 728-8392. The cut off date for reservations is July 12.

At 1 p.m. the first of three much anticipated duck races will be held for the benefit of the Calaveras Youth Mentoring Foundation.  Information on how to participate is available at CalaverasMentoringFoundation.org.

During the afternoon there will be a variety of games for all ages including a three-legged race, an egg on a spoon competition, and a water balloon toss.  There will also be a Dunk Tank where anyone may purchase a ball for one dollar to attempt to send a favorite local dignitary from his or her perch into a vat of cold water.

Another afternoon highlight will be the Murphys Cakewalk.  A game, very popular in the 19th century, a cakewalk is much like musical chairs with delectable baked goods as prizes.

The day’s activities will conclude with the Second Annual Murphys Homecoming Bocce Ball Tournament starting at 6 pm.  Organized by Jan Schulz and his Boccie Buddies, the tournament will feature 20 two-person teams that will descend on the recently improved bocce courts to vie for fame and prizes.  “Commissioner” Schulz is taking reservations, and supplying information at 728-3753.  Entry fee is $50 per team.  The money raised will go to maintaining and improving the courts.

There is no admission charge for Murphys Homecoming and ample free parking is available nearby. Donations to help maintain the park are always gratefully received. 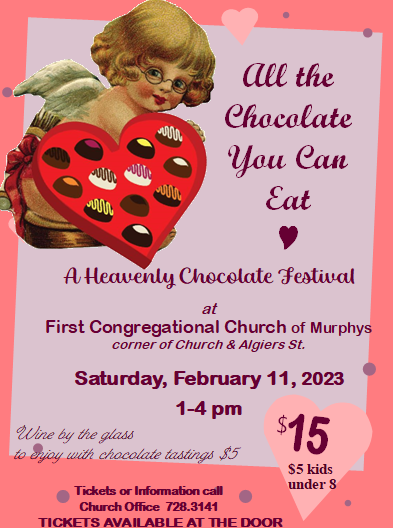 Please come join us for our annual Heavenly Chocolate Festival […]